The Carroll Chargers forced another high-intensity game against the Leo Lions, winning the fourth outing between these two teams. Dylan Carteaux scored his first four goals of the season, bringing his point total to six points. Alexander Mulholland kept the Lions in it, making an incredible 39 saves on 45 shots.

Dylan Carteaux for Carroll opened the scoring two minutes in on a back-door tip-in from Carter Gnau and Davis Cline. The Leo Lions would tie it up from a rebound off of Carson Carteaux’s pads from Dylan Davis. The first penalty of the period would belong to Sammy Phillips for the Chargers as he would head to the box for tripping with about five minutes left. Leo would capitalize with a Power Play goal from Weston Roth who shot on the low glove. Carroll would tie it up once more, this time with Carter Gnau shooting on the near side top corner. Carroll finished the first period as Broderick Berge headed to the penalty box for a slash.

The second period didn’t have nearly as much action as the first. Leo got called for too many men about halfway through the second. Dylan Carteaux for the Chargers scored his second of the night with about 3 minutes left to go in the period. Corbin Klenke got the helper on that screened play.

Dylan Carteaux scored his third goal of the season and third goal of the night off a bouncing mid-air tap-in. Leo got called for the second time in this game for another too many men penalty. Carroll’s Anthony Baldwin scored Carroll’s fifth of the night on Mulholland’s low glove side. Carroll called a time-out right before Leo’s Dylan Davis scored his second of the night to pull the Lions within 2. Leo used their 30-second timeout before Carroll headed to the box as Baldwin was called for a slash. Leo pulled Mulholland to try and pull within one, but Dylan Carteaux sealed the deal with his fourth of the night, a shorthanded empty netter.

Total shots on goal were 19 for the Leo Lions and 45 for the Carroll Chargers. Carroll’s Carson Carteaux made 16 saves as Leo’s Mulholland had 39. With this 11th win of the season for the Chargers, they were named Regular Season Champions. 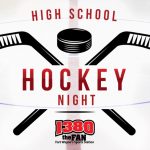