With about a month remaining in the regular season, Purdue Fort Wayne Mastodons men’s basketball coach Jon Coffman acknowledged that this year’s team was going to win with an identity much different than years past.

The first five seasons under Coffman have produced teams that consistently scored 80 or more points and were among the national leaders in three-pointers and three-point percentage. This is year six of Coffman’s tenure, and this team has been inconsistent in shooting the basketball. They’ve failed to connect on more than 7 three-point shots in any of their last five games, and are hitting just 27% from long-range in February, including just 25-111 (22.5%) over their last three games.

Saturday, against Oral Roberts, the Mastodons again proved just how stingy they can be defensively. The Golden Eagles were coming off a 113-70 win over Western Illinois two nights earlier and were averaging 93.5 points per game over their last four games at home. Against Purdue Fort Wayne, ORU didn’t get their 70th point until there were just 0:09 seconds left in the game.

The Dons out-rebounded ORU 39-32 and forced 14 turnovers. The problem was the Mastodons gave the ball up 17 times themselves while connecting on just 6 of 27 from outside the arc in a 72-66 loss.

The formula is simple for success this week at the Summit League tournament in Sioux Falls…play the same defensively while limiting turnovers and hitting a higher percentage of open three-pointers.

The Mastodons are 40-7 over the last three seasons when shooting a higher 3-point percentage than their opponent. This year’s team is the best defensive unit assembled in Coffman’s six seasons. Freshman Deonte Billups, at 6’5”, has shown the versatility to lock down on smaller point guards while also matching up with taller forwards.

The Mastodons ability to defend allowed them to be within two points in the second half in road games at North Dakota State and Oral Roberts and hold a second-half lead at South Dakota State, but they were just 17-70 from distance in those three games combined and ultimately lost all three games.

The ‘Dons have better shooters than the numbers show. Matt Holba has been hitting over 45% of his threes since getting over a finger injury. Brian Patrick has 8 games with 3 or more three-pointers, and point-guard Jarred Godfrey has 15 games with multiple three-pointers.

Success in the tourney will likely depend on whether the Mastodons can find their range from beyond the arc.

Having a full week to get added rest for the weary legs and putting up a lot of shots will certainly be an advantage for the Mastodons.

The Mastodons open the tourney against the number two seed, South Dakota State, on Saturday night. 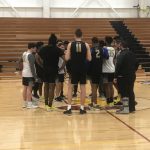 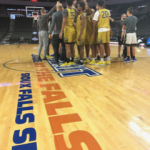